The story begins with when God wanted to destroy Sodom and Gomorrah, so he sent an angel to bring Lot and his family out of Sodom, because they were the only people worth saving.

The Angel hastily brought Lot, his wife and two daughters out of their house, and sent them going on a hill. He told them vividly to run to the mountains and that none of them should look back.

So they hurried on, but Lot’s wife, out of curiosity and longing for all she had at Sodom, looked back. And so instantly, she became a pillar of salt.

READ ALSO: How I Lost My Pregnancy In Captivity – Freed Afaka Student Narrates

The fascinating thing is that this pillar of salt she became, still stands till today. Ever since that time, the story of Lot’s wife has been passed on, and the location of the pillar has not been forgotten.

People who have gone on pilgrimage, have testified of having seen and even taken little pieces of the salt Lot’s wife became.

Scientists and Bible scholars also, have attested to this fact, that she is the actual Lot’s wife whom the bible talked about, EKO HOT BLOG  gathered. 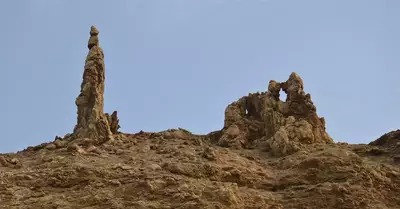 BBNaija S7: You’re Not Going Anywhere – Phyna Assures Groovy Of Getting To The Finale

JUST IN: 2 Injured As Police, Kalare Boys Clash In Gombe

2023: ‘Put Your House In Order, Meet Us At Battlefield’ –Fani-Kayode To PDP