by Samuel David
in News, Sports

According to well-connected journalist Fabrizio Romano, City have submitted £100m bid and are willing to include some of their own players in any deal for the England striker.

“Manchester City made an official proposal to Tottenham for Harry Kane. £100M guaranteed + availability to include players in the deal.#THFC have NO intention to accept. Harry wants to go, but Levy will try to keep him. ❌

Harry Kane now focused on the Euros, then it’ll be decided.”

However, Spurs are said to have absolutely no intention of accepting the deal, and it will be declined by the London club.

Harry Kane signed a six-year contract back in 2018, committing him to the club until 2024, so Spurs will be in no rush to sell the in-demand striker. 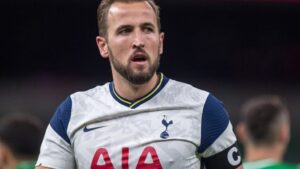 Towards the end of the 2020/2021 season, Harry Kane appeared to be dropping hints to the media that he wanted to leave Spurs, particularly in an interview with Gary Neville.

After this interview, Neville was quick to point out that at no point did Kane explicitly said he wanted to leave Spurs, and why it was different to what Paul Pogba (and his agent) have done in the past.

Neville said: “In that interview with me, he never said that he wanted to leave Tottenham. I don’t know what part of the interview people think he said that.

“He said ‘there was a conversation to be had and the chairman, to be fair to him, wants to accept a bid for him’.

“He never said that ‘he wanted to leave’. I think he’s at a point in his career where it’s a reflection point. It’s the same for Tottenham also.

“Harry Kane spoke and didn’t say he wanted to leave.

“[Mino] Raiola does it mid season after a bad defeat to undermine the club.”

After that, in a game between Spurs and Aston Villa, a completely disparaged Kane appeared to mutter “What’s the fucking point, man?” after his team lost the ball.

Kane has not yet scored at the Euros for England, and is yet to register a shot on target for Gareth Southgate’s team.