by Samuel David
in News, Sports

Real Madrid legend, Sergio Ramos, has made a decision on his next club this summer, EKO HOT BLOG gathered.

According to AS, Ramos would prefer to join Manchester United over their Premier League rivals Manchester City if he does end up making a move to England this summer.

The veteran Spain international won 22 trophies during his time at Real Madrid.

Ramos, who joined Real Madrid in 2005 in a €27 million move from Sevilla, has also attracted the interest of Paris Saint Germain (PSG). 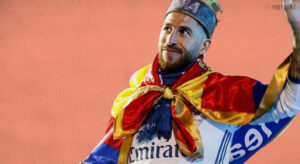 Ramos admitted during his emotional farewell ceremony last Thursday that he wanted to remain at Santiago Bernabeu.

Ramos said, “In the last few months, the club [Real Madrid] made me an offer of one year, with a pay cut.

“It wasn’t a financial problem. They [Real Madrid] offered me one year, I wanted two. I wanted calm and continuity for my family.

“In the latest conversations, I accepted the offer with a pay cut, and I was told there was no longer an offer. I was told that despite having given the OK to the proposal, it had an expiry date and I didn’t realise … It surprised me.”