by Paul Mbagwu
in Diaspora Desk

EKO HOT BLOG reports that as part of twenty-two years celebration, the EKO CLUB DC METRO announced Tuesday it would hosting its Gala and Awards Ceremony on September 9 and 10 in Washington DC, United States Of America.

The organisation will hold an Ankara Night and Awards Ceremony on September 9 at the Crown Plaza Hotel, GreenBelt, MD. The groundbreaking ceremony will be held from 7:00 p.m. to 1 a.m.

The Club Event Chairman, Hon. Larry Akinde informed that there is going to be a tour of DC by its members, which will take place on September 10 before the Gala and Fundraising night.

The Gala and Fundraising night which will kick off at 6:00 p.m. till 2: 00 am the next day will take place at the Martins Crosswinds, Greenbelt, MD.

Among the line up event for the Gala night will be the installation of the Grand Patron and Grand Matron of the club, as we as its Patron and Matron. 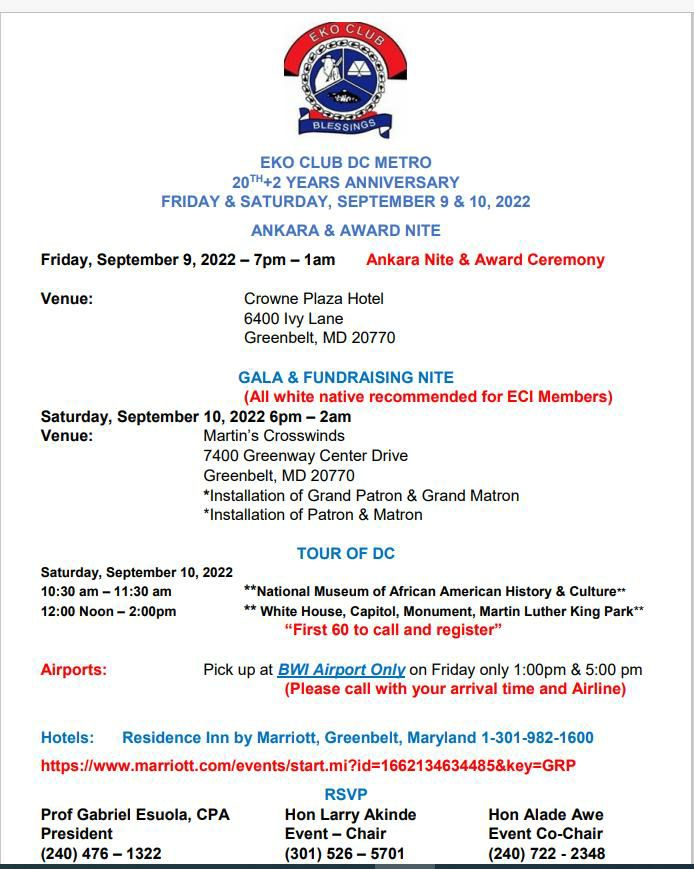 Click Here To Watch Our Video Of The Week

Bollywood: The Trans Icon Played By A Non-trans Star

“Best Way To Live” — Nigerian Man Returns Missing $3,767 To Asian Woman In US

Reinventing Our Home across the Seas: A Renaissance of Lagosians Of Canada