1. Why I Approved Redesign Of Naira Notes – Buhari

Eko Hot Blog reports that President Muhammadu Buhari has said he approved the redesign of the ₦‎200, ₦‎500 and ₦‎1000 banknotes to fortify them with new security measures against counterfeiting.

Eko Hot Blog reports that President Muhammadu Buhari will on Thursday start an official trip to Niamey, in the Republic of Niger.

3. Buhari Will Win The War Against Insecurity Before He Hands Over –Adesina

EKO HOT BLOG reports that the Special Adviser to President Muhammadu Buhari on Media and Publicity, Femi Adesina on Wednesday declared that his principal is winning the war against insurgency and insecurity in Nigeria.

4. Ayu: Wike’s Demands Not Too Much –PDP Chieftain

EKO HOT BLOG reports that the chieftain of the Peoples Democratic Party (PDP) in Delta State, Patrick Muoboghare on Wednesday reacted to the demands of the Rivers State Governor, Nyesom Wike in the party’s leadership structure.

EKO HOT BLOG reports that the Federal High Court sitting in the Federal Capital Territory (FCT) has ruled in the suit seeking to disqualify the presidential candidate of the All Progressives Congress (APC), Bola Tinubu.

6. 1.3 Million School Children To Benefit From Deworming Exercise In Lagos

EKO HOT BLOG reports that it was an emotional moment for Governor Babajide Sanwo-Olu, when he listened to firsthand stories of young boys and girls retrieved from the streets in different parts of Lagos.

8. US Midterms: Republican House Majority Strengthens With A Win In California

Republicans’ House majority in the next Congress climbed to 220 on Tuesday, when Republican Kevin Kiley defeated his Democratic opponent, Kermit Jones, in the tight race for California’s 3rd Congressional District.

EKO HOT BLOG reports that the European Parliament has officially voted in favour of declaring Russia a “terrorist state”.

10. US: Department of Transportation Under Pressure To Increase Compensation For Delayed/Canceled Flights

Three Democratic senators urged the Department of Transportation on Wednesday to increase airline passengers’ compensation for canceled and delayed flights when the airline is at fault.

11. War: Putin ‘Fears He Will Be Assassinated’ After Humiliating Defeat To Ukraine

EKO HOT BLOG reports that Russian President, Vladimir Putin is reportedly ‘fearing for his life’ after Russian troops were forced to retreat from Kherson, a Kyiv official has claimed.

12. US: Iranian Officials Sanctioned For Crackdowns On Protest

The United States on Wednesday imposed sanctions on three officials in Iran’s Kurdish region, where dozens of protesters have reportedly been killed in the past week as the Iranian government continues its violent crackdown.

13. US: Former VP Pence To Testify In Jan. 6 Criminal Probe

Justice Department prosecutors have reached out to representatives of former Vice President Mike Pence to seek his testimony in the criminal investigation into efforts by former President Donald Trump and allies to impede the transfer of power after the 2020 election, according to people familiar with the matter.

The Georgia Supreme Court reinstated a six-week ban on abortion in the state, on Wednesday.

15. 5 Healthy Habits You Must Learn To Develop As You Age

Every person has the desire to live a long and healthy life. Healthy living is not something that can be achieved by accident; it requires conscious effort to adopt specific behaviours.

EKO HOT BLOG reports that David Beckham is open to teaming up with potential bidders for Manchester United, according to reports.

EKO HOT BLOG reports that Ex-Germany star, Dietmar Hamann has branded Antonio Rudiger ‘unprofessional’ and ‘arrogant’ for showboating during Germany’s 2-1 defeat to Japan in their World Cup opener on Wednesday.

EKO HOT BLOG reports that the week 20 pool fixtures are for forty-nine (49) football matches for UK football 2022/2023 from the pool agent. 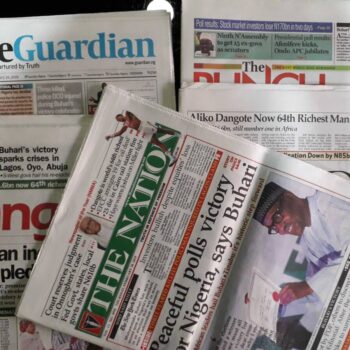 The Minister of Agriculture and Rural Development, Dr. Muhammad Abubakar, has lamented that insecurity occasioned by the activities of terrorists as well as the devastating floods were hampering the nation’s quest for food security.

The Minister also noted that Nigeria’s food insecurity was being aggravated by acute post-harvest losses was estimated at billions of Naira annually.

This, he said, had put the hunger lever in the country at “a serious alarming level.”

Abubakar stated this while declaring open a three-day workshop/exhibition on post-harvest management and value chain financing, held at the Kaduna International Trade and Investment Centre, Kaduna on Wednesday.

The workshop was organised by the Kaduna Chamber of Commerce,Industry, Mines & Agriculture in collaboration with Raw Material Research and development Council.

The vice presidential candidate of the Peoples Democratic Party, Ifeanyi Okowa, has hinted that the party is working assiduously to reconcile the G5 governors in the build-up to the 2023 general elections.

Okowa and some other south-south PDP governors including Udom Emmanuel (Akwa Ibom), Godwin Obaseki (Edo) and Douye Diri (Bayelsa), hosted the G5 governors to a meeting inside the Government House, Yenagoa, Bayelsa State capital on Wednesday.

A statement signed by Bayelsa State governor, Duoye Diri’s Chief Press Secretary, Mr Daniel Alabrah, quoted Okowa as saying that the governors were determined to deliver their party in next year’s presidential election.

He said the issues involving their party’s G5 governors led by the Rivers State Governor, Nyesom Wike, were being addressed.

The Igbo apex socio-cultural organisation, Ohanaeze Ndigbo, said Wednesday that the justice and equity the Igbo nation seeks in Nigeria had found a providential expression in Peter Obi, the presidential candidate of the Labour Party.

The organisation stated this in a statement in reaction to the fears raised by the spokesman for the Northern Elders’ Forum, Hakeem Baba-Ahmed, about the position of the South-East towards the presidential candidate of the Labour Party, Peter Obi.

Baba-Ahmed had said “we don’t know whether they are in support of Peter Obi, the presidential candidate of the Labour Party or not. The nation can see what is happening now and if the South-East fails to line up behind Obi, they should not blame anybody.”

He charged the Igbo to “reach out to other Nigerians and tell them they are supporting Obi not because he is an Igbo man, but because he is the best.”

Allaying the worries of Baba-Ahmed and other Nigerians on the seemingly indifference of Igbo towards Obi’s candidacy, Ohanaeze Ndigbo stated that “Peter Obi represents the body and soul of Ndigbo.”

Governor of the Central Bank of Nigeria (CBN), Godwin Emefiele, says with the introduction of the redesigned Naira notes, no individual or organisatiin will be allowed to withdraw huge cash without being interrogated from relevant anti-corruption agencies.

Emefiele stated this when he fielded questions from State House correspondents on Wednesday in Abuja.

Recall that President Muhammadu Buhari had earlier on Wednesday inaugurated the new Naira banknotes of N200, N500 and N1,000, expressing delight that the redesigned currencies were locally produced by the Nigerian Security Printing and Minting (NSPM) PLC.

However, the CBN governor said that with the redesign of the Naira note, the CBN would ensure full implementation of the cashless economic system across the country.

Sowore challenged the presidential candidates while speaking in an interview with Channels Television’s Politics Today.

The AAC presidential candidate challenged the candidates of the opposition parties to a debate to discuss ideas to move Nigeria forward.

Sowore stated, “Bring me and Obi to discuss our ideas on your show, I guarantee that he would not come.”

Chairman, Kano State chapter of the ruling party, All Progressive Congress, APC, Abdullahi Abbas on Wednesday said it will deliver Kano to the party either by hook or crook in the forthcoming gubernatorial election in the state.

The party Chairman stated this during the flag-off of the party’s gubernatorial campaign in Gaya area of the state.

Abbas said it will stop at nothing to ensure victory for the party in the state.

According to him, “We are assuring you that this round of election, though they say I should stop saying it, whether by hook or crook, APC would win Kano,” he said.

Some benefitting associations received N500,000 each while the highest beneficiaries got N5 million each.

Abiodun, who presented symbolic cheques on Wednesday at the 2022 World Community Day and World Trade day in Abeokuta, noted the fund was an increase from the initial N100,000 being expended under the former administration.

The Governor, while addressing different CDAs, CDCs, trade organisations and artisan groups at the MKO Abiola Stadium, also announced his administration had approved N500 million to cater for Micro Small and Medium Scale Enterprise in the State.

Embattled rapper Kanye West has claimed he asked former US President Donald Trump to be his running mate in the 2024 American polls.

The entertainer now known as Ye made this known via a Twitter pool where he indulged his fans and followers to guess what the Trump’s response was when he posed the question to him.

He tweeted: “First time at Mar-a-Lago. Rain and traffic.

“Can’t believe I kept President Trump waiting. And I had on jeans Yikes.

A Federal High Court in Abuja has struck out a request seeking to nullify the candidature of Bola Tinubu for the 2023 election.

The former Lagos governor is the second defendant, and the ruling APC the third defendant.

Chelsea legend, Didier Drogba, has given a reason why African countries struggle to perform at World Cup tournaments.

The 2022 FIFA World Cup in Qatar commenced last Sunday, with the host losing 2-0 to Ecuador.

No African country has ever reached the World Cup semi-finals, and that doesn’t appear likely to change in Qatar.