by Philip Ibitoye
in International

Eko Hot Blog reports that Twitter’s chief executive, Elon Musk, announced early Friday that famous rapper and fashion designer Kanye West would be suspended from the social media platform after he tweeted an image of a swastika inside the Star of David.

The swastika is an ancient religious and cultural symbol, now also widely recognised for its appropriation by the Nazi Party and by neo-Nazis. 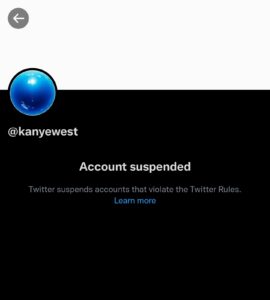 The deleted post is only one in West’s string of antisemitic remarks on social media.

Instagram blocked him from posting after he suggested on the platform that Sean Combs, the rapper known as Diddy, was being controlled by Jewish people. Ye has also lashed out against Jewish people via Twitter.

The indefinite Twitter suspension happened on the same day that Ye had appeared on a podcast hosted by the Infowars conspiracy broadcaster Alex Jones, during which he told Jones, “I like Hitler.”

West had also tweeted an unflattering photograph of Musk being hosed down on a yacht.

“This is fine,” Musk tweeted in response to the image. “This is not,” he wrote in regard to the swastika post, confirming West’s suspension.

“He again violated our rule against incitement to violence,” the Space X CEO added. “Account will be suspended.”

I tried my best. Despite that, he again violated our rule against incitement to violence. Account will be suspended.

Musk said he tried his best to avoid the outcome.

I tried my best. Despite that, he again violated our rule against incitement to violence. Account will be suspended.