by Philip Ibitoye
in EKO NEWS

Eko Hot Blog reports that Lagos State First Lady, Dr. (Mrs.) Ibijoke Sanwo-Olu has joined the advocacy for environmental sustainability with a call on residents of the state to embrace the “Sanwo Switch to Gas” project initiated by Lagos State Environmental Protection Agency (LASEPA) for a safer and healthier Lagos environment.

She made the call recently at the launch of “Sanwo Switch To Gas” project (SS2G) organised by LASEPA, at Elegbata Sports Complex, Lagos Island.

Sanwo-Olu stated that the SS2G is part of the ‘Trash for Cash’ initiative of LASEPA where residents are rewarded with Cash, Food Produce, Health Insurance Card, Cowry Card and Gas Cylinder by the government in exchange for plastic wastes, unserviceable and abandoned electrical appliances, used or black oil, among others.

The first lady said that she was delighted to identify with LASEPA for the flag-off of the “Sanwo Switch To Gas” project on the Lagos Island, adding that the initiative is in line with the commitment of the administration of Governor Babajide Sanwo-Olu to ensure sustainable management of the environment.

The governor’s wife made reference to a study carried out by the World Bank in 2021, where it was revealed that air pollution was empirically adjudged to be responsible for most premature deaths annually with children below the age of five as the most demographically affected. 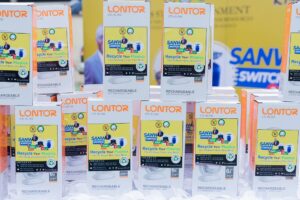 She noted that Lagos State, as a coastal city, is especially impacted by various human-based activities and a growing population estimated to hit 40 million residents by 2050, stressing that the development and challenge of ensuring the fair and judicious use of the environment for all, amidst multi-level bottlenecks, are of critical concern to the state government.

Sanwo-Olu explained that the SS2G Project is specifically targeted at ensuring emissions from various cooking and other solid and fossil fuels dependent processes are reduced and phased out where reasonably practicable, whilst returning value to the pockets of residents and improving the overall quality of life.

She, however, enjoined all Lagosians to support the “Sanwo Switch To Gas” project and see the call to join the fight to safeguard the environment as a collective duty and a responsibility owed to future generations.

Also speaking, the Commissioner for the Environment and Water Resources, Mr. Tunji Bello, said that the Lagos State government is proud to introduce to the Lagos Island Community an inclusive approach and intervention mechanism to the various environmental issues.

The General Manager of LASEPA, Dr. Dolapo Fasawe, said that the idea of “Sanwo Switch To Gas” was informed by the need to take decisive and deliberate plans for the health of Lagosians and the environment.

She pleaded with participants at the event to cultivate the habit of reusing non-degradable plastics and proper management of waste, saying that somebody’s waste is another person’s raw material.

“You Are Doing Well” — Buhari Tells Sanwo-Olu In Lagos